Sometimes human stupidity is just a fact. Only wars on the news, money corrupting everything, people killing each other and destroying their planet. And sometimes comes up a tiny miracle, like a secret in the palm of my hand and it pushes me to believe in “la vie en rose.” Rose, like the Vercors’s cliffs pinked by sunrise in this small village of Gresse en Vercors. There we are, after an almost non ending journey for some, with our utopian Balkano-Alsatian band Papyros’N BalsiKa. But those 38 young people from Bosnia-Herzegovina, Serbia, Croatia, Turkey and Alsace, are indeed real and full of such a overwhelming life force. Some know each other since last summer and I smile when I remember how afraid I was last year, on first day of meeting. Our aim was to gather in the same band young people from different communities in the Balkans. But how to create links between young people who have perhaps not experienced war but were impressed by their family’s  traumatism, did not learn same recent history, live cut off from each other ? Was it possible for them to share daily life, to discuss, to play together on stage and create something beautiful?

This project began in 2006 with Association AkustikUm from Tuzla, then with StolacMetkovic’s brassband. And it took a long time to link young people from BiH’s communities. It make me think of making a mayonnaise, first you have to take your time to stir first ingredients, then you can add oil, this year, emulsion ought to stand it. OK, but … One year passed, youngsters are not all the same ones. New participants from Zagreb, young Turks from Istanbul join us. Muslims, and not in the balkanic way which gives flexibility to the rules of dressing and fooding. Two young Fatih University’s students are veiled. All eat Hallal.

And first evening, at once, a concert with the audience singing and clapping hands. Young stanbuliotes wonder what they do on stage, but they participate, Ramazan takes the Davoul, Hale dances with her Kamanja, small and frail, elegant, smiling, girls have engels’s voices, public is applauding. Participants are tight on stage, bathed in the vibrations of this huge orchestra and feel what is to be inside the heart of music. They will explain later that they were all excited to come to France, to meet other young people, and they were surorised to find more, they discovered “a family” and were thrilled to go on stage … All that they want now is to come back, to be BalsiKa, again and again. 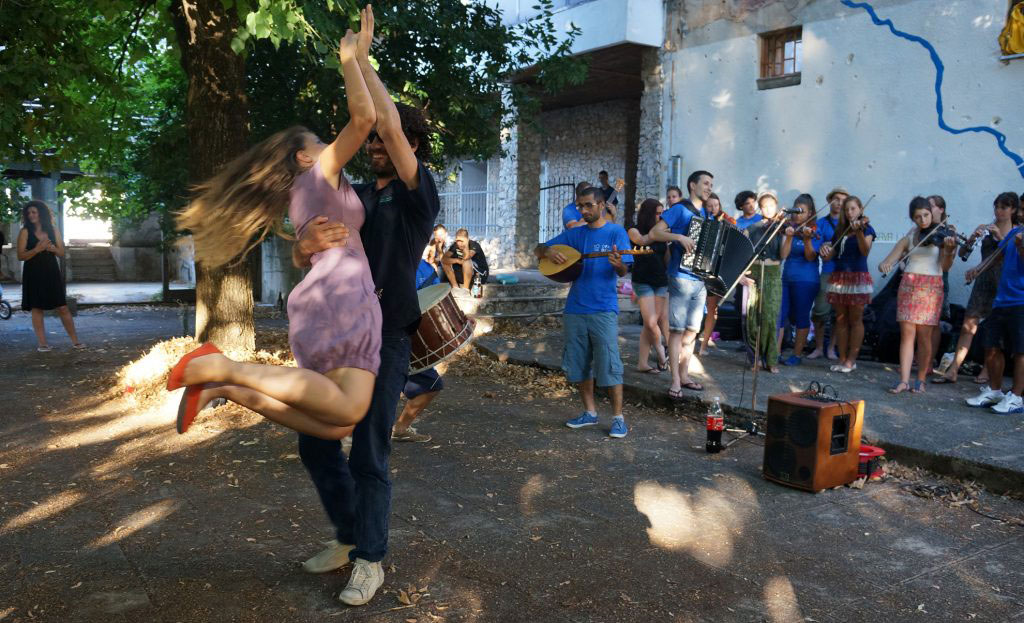 Our theme this year is about French moto. Liberté, Egalité, Fraternité. Fraternité, Brotherhood, Brastvo, Kardeslik. Some said it was communism, there is some nostalgy of Tito’s time in the Balkans. Or else an utopia, impossible, or only with people with same hobby. We cannot be brothers. Otherwise, why war does exist ? Michel Fatisson speaks about his experience as a Marist Brother, solidarity, tolerance, his experience working in jail “Many become criminals by accident.” “You live brotherhood in this project. You are on the right path, the most wonderful way to learn the fraternity, to win this dimension.” Fratricidal war, invading Ottomans, “tête de Turcs” all this is vanishing. During the discussion, we try to find out what is Fraternité : something that can not be imposed, which is inside us, that we chose and then it changes our way to see the world. Our poet, Murat, wrote “Fraternity is like the sun, he doesn’t choose where he shines.” And the sun did shine. During the long, tiring for some non-sportive musicians, walk on mountain’s highfields. Brotherhood was this Babel of languages, mutual assistance in explaining to those who didn’t speak fluent English. Fraternity to share water, help each other. Fraternity essential to make Freedom and Equality humanily possible, to allow human rights to be respected. Fraternity, what was lacking to French Revolution, to some political regimes because it cannot be imposed : this quality has to be inside man’s heart. This little word often came up, with “dundurum”, sort of “Joker word” invented by Nedim to replace any word.

Cool and smelly shade of pine trees, Mont Aiguille, majestic, a gigantic tree climbing park to have wings, fly from tree to tree, free. Safety rules. “With freedom come boundaries and responsibility, so I respected them.”

Again concerts, some completely crazy, some more intimate as the one in the little chapel of La Batie. But always, from the first notes, as pur-sang horses ready to start and, at first sign, music starts, powerful, overwhelming the audience, spreading links, vibrations between musicians. They look at each other. I feel this connivance, waves of  fraternity.

Of course, some are more “in it”, taking advantage of each moment of sharing, exchanging. Some show off and want to be in the front stage, some prefer to stay in a small group with their friends, don’t easily accept constraints of this large group with its inertia, difficulty to satisfy everybody, need to stay together, to obey the rules of community. Rules edicted so that nothing goes wrong. We had to be vigilant to be able to move forward,.

When coming home they will remember some pictures, shared moments. The shepherd explaining cows’s psychology. Luka (after that, nicknamed Lu-cow) waiting the cows to sniff him. Grenoble, les oeufs, its wonderful museum, witness of Western cultural history, freedom of expression. Peaceful park of Vizille, huge paintings of French Revolution’s Museum, Aqueduct in Saint Nazaire en Royans. And after, Ecomusée d’Alsace and the arrival at Suzy’s place, Youth Hostel in Saverne’s castle. And even more privacy in this magic place.

Emotion when Nedim, right in the middle of the concert, kneels and asks Natasa’s hand. Choses this place, this moment, with all the musicians around, as witnesses. Evening is Balkanic and everybody sings sevdalinke, dances non-ending Kolos, led by Vedo and his harmonica. “Jiveli ! “

Strasbourg, Alsace, our public. The Rhine, to walk across the bridge leading to Germany. No border, freedom.

Council of Europe, film, explanations. R. is asking why only soldiers who played a role in war, have all glory of peace. In the Great Hall of the Assembly, we ask to honor Roma by singing a capella Ederlezi in three languages : it is as well a gypsy song but also a Serbian homage to Saint George, and a hymn to spring in Turkey. Every day, we drop some seads : handshake to Pierre Pfimlin, actor of the miracle of Franco-German reconciliation, discussions, games. The Phrygian cap built during the Revolution to prevent the destruction of the spire of the Cathedral, intolerable religious symbol. The palace of the Prince-Bishops of Rohan, witnessing provocative wealth of Church and that time. Equality during Revolution was a claim against Nobles and Clergymen. But now does equality exist ? Opinions are divided “Men should be equal, but are not in many countries”

Most interesting meeting about freedom of press with C., journalist. Young people have their opinions, talk about their countries, manipulations of partisan press, official discourse on so-called terrorist journalists, attachment of youngsters to Internet. The journalist explains the need to check information and necessity to be free to make inquieries, limits of journalistic freedom.

Discussion with, a lawyer “engagé”, E., on his job : try to understand people : find out psychology, circumstances that led a man to break the law, to become a criminal. Understand deeply, trying really to read in the other’s heart and life: perhaps it is again have Fraternité enough to look at the other without a-priori, without discrimination, with most humanity. We speak about discrimination : against the Roma, against homosexuals. Everyone speaks honestly about what he thinks of what is happening in his country, the words are often hard, a bit shocking for us French. But everyone listens to the other, some claiming that homosexuals are sick people, others that private life of individuals is up to them. C. concludes “I think we can fall in love with any human being.”

These are just the seeds. Some will germinate in discussions, late in the night, between young people in small groups. Going far beyond what they have dared to say in public. Some will perhaps remain and maybe one day change their perspective.

We decided to organize a day where everyone tries to understand what is Ramadan. Most tried to keep as much as possible, to feel hunger, thirst, the brain controlling the body. To have a thought, as Ramazan and Yunus explain, for those who do not have to eat or drink, who are suffering. In any case, we are all very hungry at night for dinner concocted by Ayse, Hale and Bahar. Magical evening with a video presentation of their country, their city and an engagement party. Nataša course is the bride and we all feel the emotion when girls are singing in the light of candles around the bride, veiled, glittering in scarlet and gold. Last evening, beautiful light in Itterswiller, little village among the vineyards, the audience is close, the musicians mingle with spectators. In two weeks, they are strongly welded, strong friendships were formed, beyond nationalities, religions, differences, languages.

Last melody. First flashes. As soon as we are in the cars that the sky is falling on our heads. “Par Toutatis !” After 17 days of brilliant weather, time of departure, separation ” Il pleure dans mon cœur  comme il pleut sur ma ville ” …

All are returning to their country, far, far away. Tjana stays some more days in Tuzla before returning to Serbia, the computers will have much work, face-book, photo sharing, videos, go on sharing. Maša would like to do part of her medical studies in Strasbourg with Alice. Yunus and Ayse want to be judges at the European Court of Human Rights. But above we all want to be again together, organize a lot of meetings, discussions, concerts. Hurry up ! Don’t cry, every minute that passes brings us closer to our next meeting.

by the European Youth in Action program and the DRAC Alsace